As the countdown to Mind your step in Dublin starts (7-8 March 2015), I wish to share with you a story Tiziana Bolfe told me.

Tiziana, a choreographer and an architect at the same time, was one of the speakers I invited to the Mind your step roundtable in Bassano del Grappa (August 2014). She talked about how she felt that dualism, how she could combine it in her own poetics.

“There are invisible traces, left by the passage of people: traces that are determined by the way we live places, traces of how we live our body in space” (Tiziana Bolfe).

On her presentation, Tiziana used a photograph which had been undoubtedly taken in Grand Canal Square, Dublin.

So I asked her to tell me more about it.

“I will tell you just what happened: at the time I was studying Visual Arts, I was collaborating with an architectural firm, to sum up I was half a dancer, half an architect. Daniel Libeskind was a myth for me: he wasn’t just a designer, he could actually shape thoughts, each work of his has a dramaturgy and is the materialisation of an emotion. I couldn’t wait to see one of his works live.

I went to Dublin to visit one of my best friends, she was working there. One evening I went to the Square [Grand Canal]. The “tragedy” was already underway: I went to admire pieces of architecture, but wanted to dance on them. Always. And that’s what I did: I used one to dance… a site-specific urban improvisation…

The photos were taken by Marco, my partner, he was the only “audience” member, besides the children who were playing there… Voilà”. 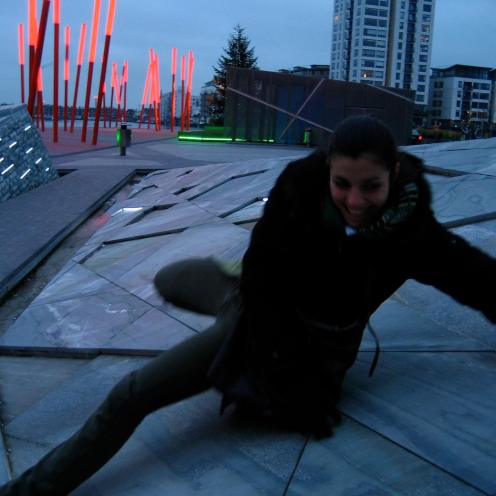